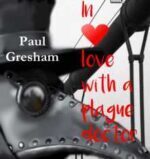 Finally, the plague doctor orders the coach driver to turn the coach into a long imposing drive, with a grand house at the end of it.

A lantern is flickering in a window on the top floor, but otherwise the house is in darkness.

I wonder who lives there, and the plague doctor answers my thoughts, almost as if he can read them.

“His Lordship the Duke of Earldom is one of my most important patients” he said worriedly.

“If he dies because of leech failure it will be the end of my career.”

“I will never be allowed to practise medicine again.”

“What?” I say incredulously.

“The World Wide Medical Association Of Plague Doctors will revoke my licence to practise” he explains.

If he isn’t allowed to practise medicine it could be the end of my dream!

And perhaps discuss my husband’s successful career with the wives of other successful plague doctors, over afternoon tea.

In fact it’s so nice that the people who own homes there don’t put their body waste – urine and excreta, in a bucket and throw it out of the window.

They have to agree not to do this before they can purchase a property there, it’s something to do with maintaining property values; if people throw their body waste out of a window it can have an adverse effect on the value of the properties.

It’s high above the city, so the air is fresh and clean, unlike the plague-infected air that festers around the smelly hovels of the poor, where the plague is rampant.

If I don’t marry the plague doctor I’ll also have to live there!

I won’t let that happen!

Suddenly I have an idea.

What if His Lordship the Duke of Earldom doesn’t die of leech failure?

What if he dies of something else?

That way, no-one can blame the plague doctor for his death.

Then I’ll be able to marry him and live in a nice house on Hampden Hill and never have to throw buckets of body waste out of the window!

But if the Duke doesn’t die of the plague, what else can he die of?

Suddenly the coach comes to a halt and I realise that I have to think fast.

Then the solution comes to me.

There’s a hat pin pinned to my hat.

What if I can somehow stick it into his heart?

Maybe it will be mistaken for a heart attack.

There’ll just be a small puncture wound, which will hardly be visible.

But to do that I’ll have to be by his side, along with the plague doctor, when he’s trying to cure him.

Will the plague doctor allow me to be with him when he’s trying to cure him?

And if he does allow it, will he see me when I stab him?

I have to think of a way of distracting him – just for a few seconds.

Maybe I could distract him by using my feminine skills, by whispering in his ear and touching him.

But he seems to be impervious to that kind of thing.

I have to do something!

Suddenly the coach door is opened and the plague doctor is standing there.

Will he allow me to come with him when he is trying to cure the Duke Of Earldom so that I can kill him and live in a nice house on Hampden Hill which is so nice that the residents don’t have to throw their body waste out of the window?

In love with a plague doctor part 5

In love with a plague doctor part 3

In love with a plague doctor part 2

In love with a plague doctor part 1