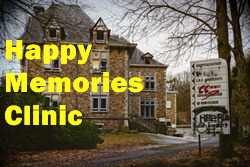 I parked my car and outside the Happy Memories Clinic and again wondered if it could really replace unhappy memories with happy memories, as it claimed it could, on its website.

What if something went wrong?

What if it negligently removed a happy memory instead of an unhappy one?

Or even worse, what if it replaced the happy memory that it had removed with an unhappy one?

I wouldn’t be too happy about it, that’s for sure.

But what could I do about it?

Make a huge claim for compensation on the grounds of medical negligence?

If the claim was successful, I would have enough money to be happy for the rest of my life.

I would put up with the unhappy memories that had been implanted in my brain.

I surmised that I would have a happy future if the Happy Memories Clinic bungled the operation to remove my unhappy memories.

You know how it is, one minute you’re happily contemplating your future, as a happy victim of medical negligence.

But the next minute you begin to realise that maybe it won’t be so easy to prove that you’re a victim of medical negligence.

If the Happy Memories Clinic was different, it would be, well, different.

If it was the kind of clinic that routinely removed limbs, maybe called the Happy Limbless Clinic, it would be easy to prove medical negligence.

Especially if it removed the wrong limb.

Well, it would be pretty easy if you were in possession of this wrongly removed limb, and that you could produce it in court.

I imagine that there might be a few tricky issues revolving around human tissue decay and decomposition.

But how could you stand in front of a judge and produce the wrong memory that was removed?

I was being too pessimistic.

There was nothing to worry about; the Happy Memories Clinic had a fine reputation, it had successfully removed the unhappy memories of some very prominent people, ranging from politicians to serial killers.

In fact one of its most impressive recommendations was from a serial killer who was suffering from the unhappy memory of not burying his victims deeply enough, and subsequently being arrested and incarcerated for life.

I studied the façade of the Happy Memories Clinic again.

Certainly, it seemed to be a little derelict, abandoned – someone had sprayed graffiti on a sign in the grounds, for example.

But hey, never judge a clinic by its graffiti.

I tried to decide what to do.

Was it wise to allow the Happy Memories Clinic to probe deep into my mind, and replace my unhappy memories with happy memories?

Maybe I should just turn my car around and drive away.