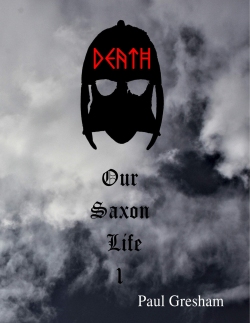 In my novel ‘Our Saxon Life’ I portray the Anglo Saxons as ‘brutal,’ but isn’t that being rather unfair to this ancient civilisation?

Surely all ancient civilisations were brutal.

The ancient Incas sacrificed children to their gods. And of course they in turn were brutally enslaved by the Spanish conquistadors, who conquered much of what is now South America.

The ancient civilisation of the Romans effectively brutalised their slaves, by forcing them to take part in gladiator contests. At least, according to the movie ‘Ben Hur.’

Finally, the ancient Egyptians brutally forced their slaves to build their pyramids.

Yet as far as I can gather, the Anglo Saxons didn’t do any of these things.

They were quite nice, really.

According to some historians they might have been guilty of what we would now describe as ‘ethnic cleansing.’

According to these historians, they exterminated much of the original population of the British Isles, the parts which they conquered, and replaced it with their Anglo Saxon population.

In the novel, the Saxons buried the Angelcynn (their word for the English) that they had killed, in a place which they called the Endelîf Eard, meaning End Of Life Earth, or cemetery.

Nearby is a village which is entirely populated by modern-day Anglo Saxons.

What if the ghosts of the Angelcynn that their ancestors had killed were still angry with them?

Would it really be a good idea to build a new Anglo Saxon settlement at the Endelîf Eard?

Professor Wulfgar, one of the main characters in the novel, thinks so.

But strange things happen when he tries to build it.