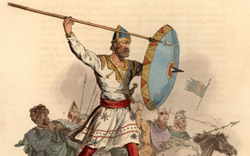 We sometimes hear about ‘American Exceptionalism,’ but what about ‘Anglo Saxon Exceptionalism?’
And what does the word ‘exceptionalism’ mean in this context?
In very simple terms, exceptionalism means ‘exceptionally competent.’
For example, perhaps America can be said to be exceptionally competent in the field of invention.
Is there such a thing as Anglo Saxon exceptionalism?
Were the Anglo Saxons exceptionally competent?
Yes, they were – at least according to the main character in my current work in progress, which I’ve nearly finished writing, and has the working title of ‘Anglo Saxon horror story.’
He is so convinced of this that he creates an Anglo Saxon society, in an isolated village in East Anglia, England, which is also the main region where the Anglo Saxons arrived.
However, is it acceptable in this age of political correctness to claim that a certain race is exceptional?
How would his students react if he dared to teach ‘Anglo Saxon Exceptionalism’ at the university where he teaches?
Would they accept that it’s free speech, the discussion of all kinds of ideas, including some which may not be acceptable? After all, surely the purpose of universities is to disseminate ideas.
Or would they react in a hostile way?
Or even in hostile violent way?
As in the following, which I’m considering writing:
‘The angry students attacked him with insults and blows.
“Fascist scum!”
Kick!
“Racist!”
Kick!
“Nazi!”
Kick!’